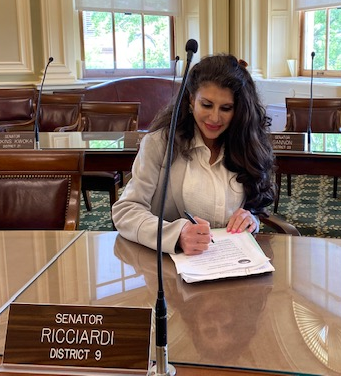 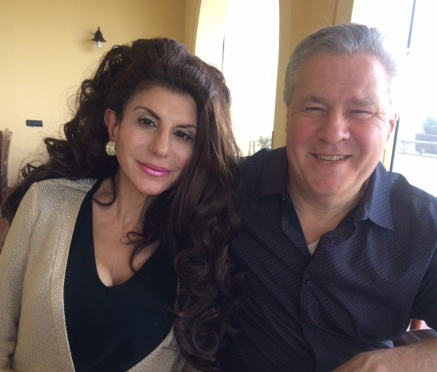 If there is one word to describe Denise Ricciardi, it is tenacious.

Before moving to New Hampshire, Denise grew up in a diverse suburb of Philadelphia. Her father was a hardworking, middle class engineer who had put himself through college with help from the GI Bill.

After college, Denise took a job at a company that specialized in insurance for long-term care and Medicare supplement plans. She learned the industry quickly and seized on an opportunity to open her own business in Nashua specializing in policies for seniors with clients all over Massachusetts and New Hampshire.

Her company grew quickly and was able to expand its work to aid non-profit groups such as the New Hampshire Association for the Blind and the American Red Cross providing insurance for its members.

After selling her business, then meeting her husband, Giorgio, they moved to Bedford in 1997 and started their family.

Denise has always been an active community volunteer in Bedford. Her long list of volunteer activities includes cooking and delivering meals to new mothers with the Bedford Newcomers Club, raising money for the playground at Memorial School, teaching Sunday school at Saint George Greek Orthodox Cathedral, producing a cooking show for Bedford Community TV, substitute teaching in the Bedford schools, and teaching cooking classes for the Bedford Parks and Recreation Department.

In 1998, when Bedford’s Olde Towne Day came close to folding, Denise saw another great opportunity to help save a cherished community event. Working with the Olde Town Day Committee, she created and organized a hugely successful fashion show that raised money for local charities, created enthusiasm, and recruited new volunteers.

Discovering that a cell phone tower was proposed to be placed close to an elementary school near her home, Denise first became involved in politics. Along with the help of many other Bedford residents, she waged a long, uphill battle, until the cell phone company eventually withdrew their proposal.

Her leadership on this issue led Governor Chris Sununu to appoint her in 2019 to the state’s 5G Health Study Commission which is tasked with determining any potential hazards of further expansion.

That same year, she was elected to the Bedford Town Council. She has just finished serving a 3-year term during which she was elected Vice Chairman. Through the hard work of the council and responsible budgeting, the town of Bedford has maintained a AAA bond rating from Moody’s.

As a member of the town council, she served on the Conservation Commission, Telecommunications Commission and Highway and Safety Commission, tasked with planning and budgeting for all of the town’s infrastructure projects. During the COVID-19 pandemic, she teamed up with Bedford Police and others to form “Bedford Cares”, a network of volunteers who deliver food and run errands for those who are at risk and need to remain home. Bedford Cares continues to operate locally as well as having made huge contributions to the Ukrainian refugee effort.

In 2020 she was elected the NH State Senate to represent District 9.

Senator Ricciardi has a saying that goes like this: “Everyone needs to stop trying to be right, and instead, just do what’s right for the people of New Hampshire.” Indeed, she has been an advocate for the people regardless of party.

Some of the Senator’s accomplishments include:

Because of these and other Republican-supported policies, NH is the safest state in the union.

Senator Ricciardi has been an effective legislator who has always worked across the aisle, for the people. With your support, we can be sure she can keep up this great work for a second term.

(Dublin, Hancock and Peterborough are no longer included in District 9)

Let’s help re-elect a passionate, hard-working, tenacious senator who will fight for you and never back down. Denise has proven to be that senator!